Porting ASP.NET Core application to VS 2017

It’s been ten days since Visual Studio 2017 RTM was released. .xproj and project.json files are not going to be supported anymore so it’s time to port our (ASP).NET Core projects to the new, simplified .csproj project file format.

This post is not a complete guide on porting. I want to show you what problems I have faced and how I had solved them. I hope that somebody will find this useful. The examples are based on an ASP.NET Core application for trading energy that I develop at work. So it’s something real, not “Hello World”. I have also ported BenchmarkDotNet to the new .csproj file format so it’s a mixture of my personal experience.

Nate McMaster, who is a developer on the ASP.NET team wrote two great blog posts about porting to MSBuild. If you want to have a good understanding of what you are doing you should read them first:

The first thing you need to do is to open your solution with new Visual Studio 2017 and approve the One-way upgrade. I recommend doing this from VS, not the console (dotnet migrate). VS takes better care of all the MSBuild-related paths. So if your solution contains a lot of different projects (C#, F#, VB, .NET Core and classic .NET framework) you have a higher chance of success. (BenchmarkDotNet contains all of them because we support all possible scenarios ;) ) 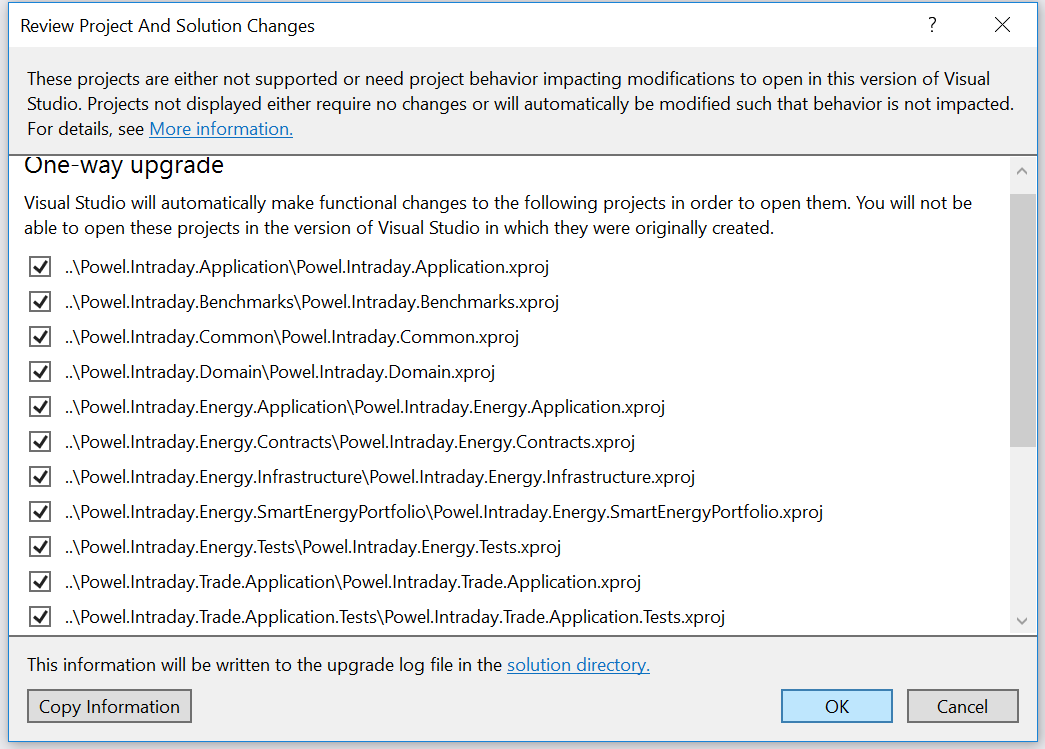 Then you just wait for the dotnet migrate to do its job.

After it’s finished a Migration Reports is opened in the web browser. Make sure you read the errors part. Zero errors in the report does not mean that you are done with the porting ;)

You will notice that all project.json and *.xproj files are gone. Don’t worry, they all have been saved in the Backup folder. Of course, the new .csproj files have been created. At this point of time, you should commit all the changes. Later on, you will see what was done by the tool, and what changes you have applied manually.

Software engineers should have limited trust in tools they use. So now it’s time to compare your old project.json files with the new .csproj files. If you have read the two recommended posts you should already know what the mappings should be. Look for the missing parts, the less common or more complicated feature, the higher the chances that something is wrong. Once you find a difference you need to do the “manual” porting ;) I recommend you to do a separate commit per every “fix” so your team members can understand what you did.

For me, the first thing I noticed was that paths to custom ruleset files for static code analysis were missing.

In case you also use StyleCop.Analyzers with custom rules you need to fix it:

Please notice the usage of $(SolutionDir). MSBuild has a long list of available properties. By using them you can take advantage of all MSBuild features!

You might also discover that VS has created runtimeconfig.template.json file next to your ASP.NET Core app project file.

For me the less the files the better, so I advise you to move these two flags to the .csproj of your app and remove the runtimeconfig.template.json.

Please also keep in mind that Concurrent Server GC mode which is the default mode for APS.NET Core apps has some drawbacks. It gives you a great performance, but not for free. It creates two dedicated GC threads per every logical core. So if you have a hundred of “Microservices” running on your 24 core server you end up with 100 x (24 x 2 + 1) = 4900 GC threads. +1 is for single dedicated finalizer thread for every .NET process. Which option fits you the best? Just measure it ;)

Now it’s the time to build and run your app. But before you do so I recommend you to clean up your solution directory to make sure that you perform a “clean” build. What works best for me:

The first problem that I have encountered was The debug profile 'web' is missing the path executable to debug. The fact that I could not google it pushed me to blog so others don’t waste their time.

It turned out that my launchSettings.json file did not get ported correctly. It was:

Which got me one step closer:

Which I fixed with help of Stack Overflow user Cody by installing Microsoft.Win32.Primitives 4.0.0.0 NuGet package. This particular app is using ASP.NET Core and Kestrel, but runs on net46. Those of you who target netcoreapp might not encounter the same problem.

Now I was able to compile, run and debug our app.

As of today ASP.NET Core app that targets classic .NET is x86 by default. You can enforce x64 by applying: <PlatformTarget>x64</PlatformTarget> in your .csproj.

We used to have some PowerShell script that was setting version for every project.json file in our repository. With .csproj you don’t need to write your own scripts for doing this. MSBuild is a mature platform, this problem has already been solved.

If you want to use your build number that is passed by your CI to every process it spawns you can do it with MSBuild by reading the environment variable.

Then you can set whatever suits you best by using the combination of MSBuild properties, features, and variables. Sample:

To build a package you still need to call dotnet publish. However, the way of handling relative path for --output option has changed. Whatever you pass to it is now relative to the .csproj file, not the working directory (as it was before).

One important thing about CI: if you install the new .NET Core SDK it will become the default one. It means that all projects, that still use project.json file will fail to compile. It’s bad for other projects that are compiled on the same CI machine. You can avoid this problem by setting the SDK version for old projects it the corresponding global.json file:

And then in your .csproj:

In our solution, I have moved all things related to versioning to single .props file, common settings to another .props file. Then included these in .csprojs and removed all AssemblyInfo.cs files. In my case, I just don’t need them anymore. And my new.csproj files are now smaller than my old, beloved project.json files!