Profiling .NET on Linux with BenchmarkDotNet

PerfCollectProfiler is a new BenchmarkDotNet diagnoser (plugin) that was released as part of 0.13.3. It can profile the benchmarked .NET code on Linux and export the data to a trace file which can be opened with PerfView, speedscope or any other tool that supports perf file format.

Profiling Concurrent .NET Code with BenchmarkDotNet and visualizing it with Concurrency Visualizer

ConcurrencyVisualizerProfiler is the new diagnoser for BenchmarkDotNet that I have implemented some time ago. It was released as part of 0.11.3. It allows to profile the benchmarked .NET code on Windows and exports the data to a trace file which can be opened with Concurrency Visualizer (plugin for Visual Studio, used to be a part of it).

Part of my job on the .NET Team is to improve the performance of existing .NET libraries. My current goal is to identify performance bottlenecks in ML.NET and recognize common performance issues that should be addressed by .NET framework.

In this blog post, I am describing how I approach sample performance problem using available free .NET tools and best practices for performance engineering.

EtwProfiler is the new diagnoser for BenchmarkDotNet that I have just finished. It was released as part of 0.11.2. It allows to profile the benchmarked .NET code on Windows and exports the data to a trace file which can be opened with PerfView or Windows Performance Analyzer.

My way of Conducting an Interview

Interviewing people is not an easy job to do. You want to find the person which is going to get things done, enjoy working with given project, fit into the team and be happy about the money you can offer.

As an interviewer, you are also being judged by the candidate. You very often create the first impression of the company. So you also need to make a good impression. Nobody wants to work with mean or incompetent people!

In this blog post, I am describing my way of conducting the interview. In my career, I have interviewed a hundred developers and hired over a dozen of them. So my experience is not very reach, it’s limited to “my sample”.

Disclaimer: After joining Microsoft I don’t interview candidates anymore. This post is my personal approach build upon the experience prior to joining MS.

I hope that my experience can help somebody to improve the interviewing process!

Disassembly Diagnoser is the new diagnoser for BenchmarkDotNet that I have just finished. It was released as part of 0.10.10. It allows to disassemble the benchmarked .NET code:

With a single config!

C# gives us great flexibility when it comes to using different kinds of memory. But the majority of the developers use only the managed one. Let’s take a brief look at what C# has to offer for us:

tl;dr Pass and return by reference to avoid large struct copying. It’s type and memory safe. It can be even faster than unsafe!

Since C# 1.0 we could pass arguments to methods by reference. It means that instead of copying value types every time we pass them to a method we can just pass them by reference. It allows us to overcome one of the very few disadvantages of value types which I described in my previous blog post “Value Types vs Reference Types”.

Passing is not enough to cover all scenarios. C# 7.0 adds new possibilities: declaring references to local variables and returning by reference from methods.

Note: I want to focus on the performance aspect here. If you want to learn more about ref returns and ref locals you should read these awesome blog posts from Vladimir Sadov. He is the software engineer who has implemented this feature for C# compiler. So you can get it straight from the horse’s mouth!

Let’s analyse some simple C# examples to make sure that we have good common understanding of the syntax.

tl;dr structs have better data locality. Value types add much less pressure for the GC than reference types. But big value types are expensive to copy and you can accidentally box them which is bad.

Value Types and Reference Types are very different in terms of performance characteristics. In my next blog posts, I am going to describe ref returns and locals, ValueTask<T> and Span<T>. But I need to clarify this matter first, so the readers can understand the benefits.

Every instance of a reference type has extra two fields that are used internally by CLR.

Both hidden fields size is equal to the size of a pointer. So for 32 bit architecture, we have 8 bytes overhead and for 64 bit 16 bytes.

Value Types don’t have any additional overhead members. What you see is what you get. This is why they are more limited in terms of features. You cannot derive from struct, lock it or write finalizer for it. 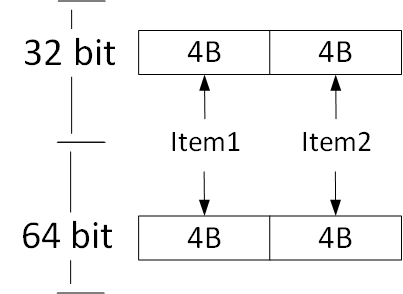 RAM is very cheap. So, what’s all the fuss about?

Using the ETW to collect the PMC counters is easy when you know how. It took me some time to get it working so I am gonna describe it in case somebody wants to do it without BenchmarkDotNet. The types used below come from the Microsoft.Diagnostics.Tracing.TraceEvent NuGet package.

BenchmarkDotNet is a powerful .NET library for benchmarking (more about it). This post describes how you can collect Hardware Performance Counters with BenchmarkDotNet. If you want to learn about the ETW internals behind it then you might find this post useful.

Some time ago I have noticed that software engineers who are working on the Span<T> are struggling with some benchmarking issues. With problems like unstable results, which BenchmarkDotNet solves. So I asked why don’t they use BenchmarkDotNet?

And then Krzysztof Cwalina replied:

Yeah, we have. In general I love BenchmarkDotNet and use it in many cases. It does have better front end reporting capabilities and is more mature from reliability and statistical analysis perspective. But it seems like BenchmarkDotNet does not support measuring instructions retired, cache misses, and branch mispredictions that we often find very useful. Would be great to combine the efforts/features :-)

Porting ASP.NET Core application to VS 2017

It’s been ten days since Visual Studio 2017 RTM was released. .xproj and project.json files are not going to be supported anymore so it’s time to port our (ASP).NET Core projects to the new, simplified .csproj project file format.

This post is not a complete guide on porting. I want to show you what problems I have faced and how I had solved them. I hope that somebody will find this useful. The examples are based on an ASP.NET Core application for trading energy that I develop at work. So it’s something real, not “Hello World”. I have also ported BenchmarkDotNet to the new .csproj file format so it’s a mixture of my personal experience.

The new MemoryDiagnoser is now better than ever!

BenchmarkDotNet is a powerful .NET library for benchmarking (more about it). MemoryDiagnoser is one of its features that allows measuring the number of allocated bytes and garbage collection frequency.

Before the 0.10.1 version of BenchmarkDotNet the MemoryDiagnoser was part of BenchmarkDotNet.Diagnostics.Windows package. Internally it was using Event Tracing for Windows (ETW), which had following implications: