Is it a problem for your application? You can use the built-in perfmon.exe to get an initial overview. 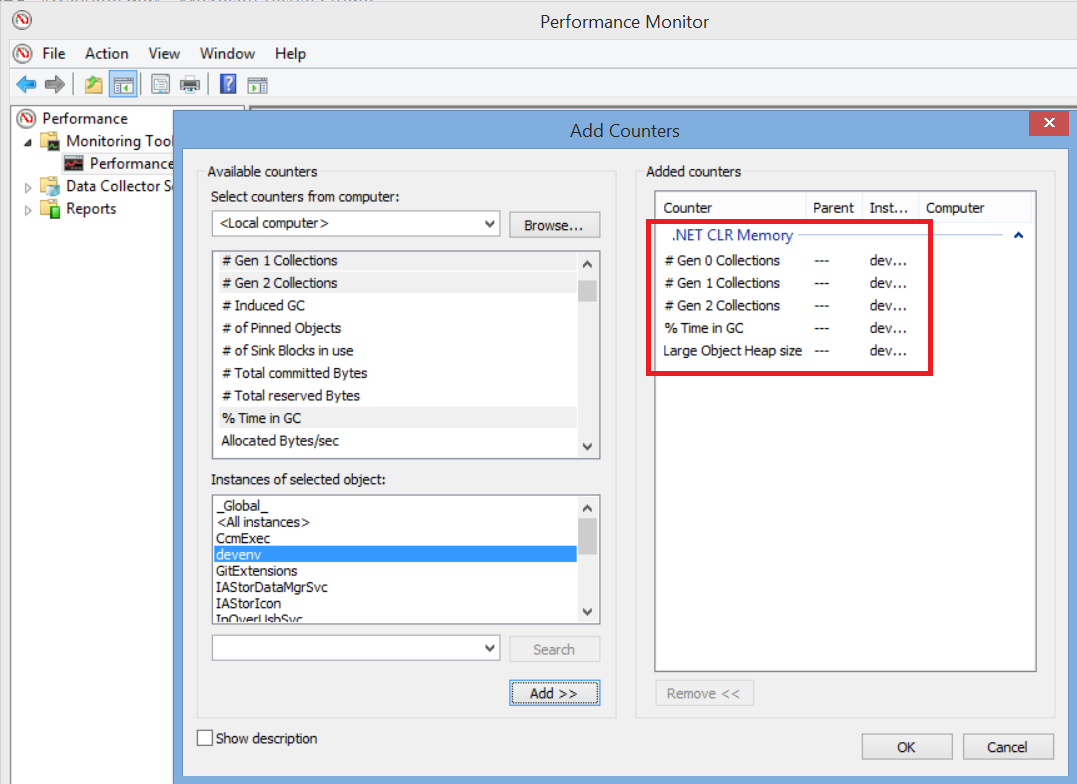 As you can see it’s not a problem for my Visual Studio. It was running for few hours and #Gen 2 Collections is very low compared to Gen 0/1.

The solution is very simple: buffer pooling. Pool is a set of initialized objects that are ready to use. Instead of allocating a new object, we rent it from the pool. Once we are done using it, we return it to the pool. Every large managed object is an array or an array wrapper (string contains a length field and an array of chars). So we need to pool arrays to avoid this problem.

ArrayPool<T> is a high performance pool of managed arrays. You can find it in System.Buffers package and it’s source code is available on GitHub. It’s mature and ready to use in the production. It targets .NET Stadard 1.1 which means that you can use it not only in your new and fancy .NET Core apps, but also in the existing .NET 4.5.1 apps as well!

First of all you need to obtain an instance of the pool. You can do in at least three ways:

Next thing is to call the Rent method which requires you to specify minimum length of the buffer. Keep in mind, that what Rent returns might be bigger than what you have asked for.

Once you are done using it, you just Return it to the SAME pool. Return method has an overload, which allows you to cleanup the buffer so subsequent consumer via Rent will not see the previous consumer’s content. By default the contents are left unchanged.

Once a buffer has been returned to the pool, the caller gives up all ownership of the buffer and must not use it. The reference returned from a given call to Rent must only be returned via Return once.

It means, that the developer is responsible for doing things right. If you keep using the reference to the buffer after returning it to the pool, you are risking unexpected behavior. As far as I know, there is no static code analysis tool that can verify the correct usage (as of today). ArrayPool is part of the corefx library, it’s not a part of the C# language.

Let’s use BenchmarkDotNet and compare the cost of allocating arrays with the new operator vs pooling them with ArrayPool<T>. To make sure that allocation benchmark is including time spent in GC, I am configuring BenchmarkDotNet explicity to not force GC collections. Pooling is combined cost of Rent and Return. I am running the benchmarks for .NET Core 2.0, which is important because it has faster version of ArrayPool<T>. For .NET Core 2.0 ArrayPool<T> is part of the clr, whereas older frameworks use corefx version. Both versions are really fast, comparison of them and analysis of their design could be a separate blog post.

If you are not familiar with the output produced by BenchmarkDotNet with Memory Diagnoser enabled, you can read my dedicated blog post to find out how to read these results.

For very small chunks of memory the default allocator can be faster.

The bigger it gets, the slower it takes to allocate the memory.

At this point of time, you should have noticed, that the cost of pooling with ArrayPool<T> is constant and size-independent! It’s great, because you can predict the behaviour of your code.

But what happens if you try to rent a buffer, that exceeds the max array length of given pool (2^20 for ArrayPool.Shared)?

A new buffer is allocated every time you ask for more than the max array length! And when you return it to the pool, it’s just being ignored. Not somehow added to the pool.

Don’t worry! ArrayPool<T> has it’s own ETW Event Provider, so you can use PerfView or any other tool to profile or monitor your application and watch for the BufferAllocated event. 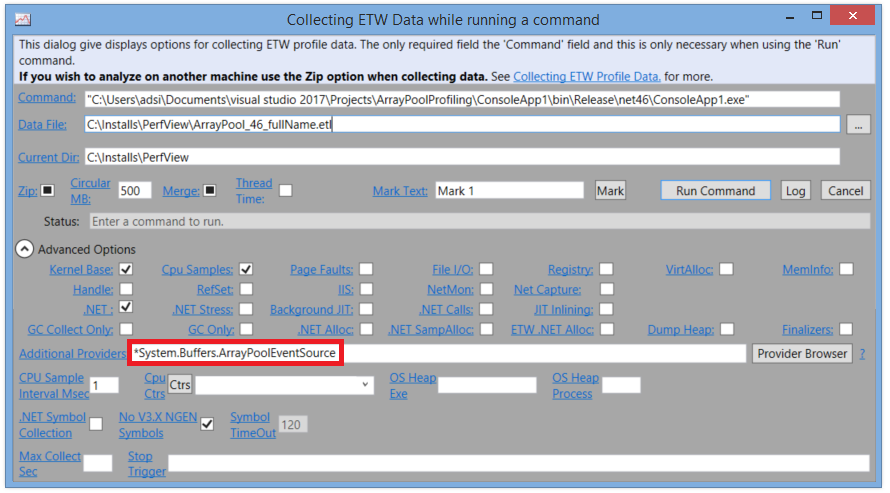 To avoid this problem you can use ArrayPool<T>.Create method, which creates a pool with custom maxArrayLength. But don’t create too many custom pools!! The goal of pooling is to keep LOH small. If you create too many pools, you will end up with large LOH, full of big arrays that can not be reclaimed by GC (because they are going to be rooted by your custom pools). This is why all popular libraries like ASP.NET Core or ImageSharp use ArrayPool<T>.Shared only. If you start using ArrayPool<T>.Shared instead of allocating with new operator, then in the pessimistic scenario (asking it for array > default max size) you will be slightly slower than before (you will do an extra check and then allocate). But in the optimistic scenario, you will be much faster, because you will just rent it from the pool. So this is why I believe that you can use ArrayPool<T>.Shared by default. ArrayPool<T>.Create should be used if BufferAllocated events are frequent.

Sometimes an array might be not enough to avoid LOH allocations. An example can be 3rd party api that accepts Stream instance. Thanks to Victor Baybekov I have discovered Microsoft.IO.RecyclableMemoryStream. This library provides pooling for MemoryStream objects. It was designed by Bing engineers to help with LOH issues. For more details you can go this blog post by Ben Watson.