tl;dr Pass and return by reference to avoid large struct copying. It’s type and memory safe. It can be even faster than unsafe!

Since C# 1.0 we could pass arguments to methods by reference. It means that instead of copying value types every time we pass them to a method we can just pass them by reference. It allows us to overcome one of the very few disadvantages of value types which I described in my previous blog post “Value Types vs Reference Types”.

Passing is not enough to cover all scenarios. C# 7.0 adds new possibilities: declaring references to local variables and returning by reference from methods.

Note: I want to focus on the performance aspect here. If you want to learn more about ref returns and ref locals you should read these awesome blog posts from Vladimir Sadov. He is the software engineer who has implemented this feature for C# compiler. So you can get it straight from the horse’s mouth!

Let’s analyse some simple C# examples to make sure that we have good common understanding of the syntax.

Passing arguments to methods by reference

In C# all parameters are passed to methods by value by default. It means that the Value Type instance is copied every time we pass it to a method. Or when we return it from a method. The bigger the Value Type is, the more expensive it is to copy it. For small value types, the JIT compiler might optimize the copying (inline the method, use registers for copying & more).

We can pass arguments to methods by reference. It’s not a new feature, it was part of C# 1.0. Anyway, I am going to measure it to make sure that it actually improves the performance. Once again I am using BenchmarkDotNet for benchmarking.

As you can see the 32bit JIT is struggling with copying large value types. Passing them by reference gave us x2 speed up in this scenario. But we have measured only the time required to pass an argument to a method. If a method is complex and time-consuming itself, the performance improvement might be very small. The smaller the method, the bigger improvement you will see.

For 64 bit the difference is smaller but still noticeable.

We can say that passing argument by reference can bring you some benefits, but you should not expect x10 time improvement. The code gets also more complex. Measure your scenario and if you prove that it brings you worthy performance improvement then use it.

Using local references is another way to avoid copying of memory. Let’s try to initialize an array of large value types and see how fast we can get with ref locals.

Note: This scenario could have been handled without ref locals. We could simply pass the argument by reference like this:

This time I have used RPlotExporter which produces some fancy charts if you have R installed and R_HOME environment variable configured. More info can be obtained here. 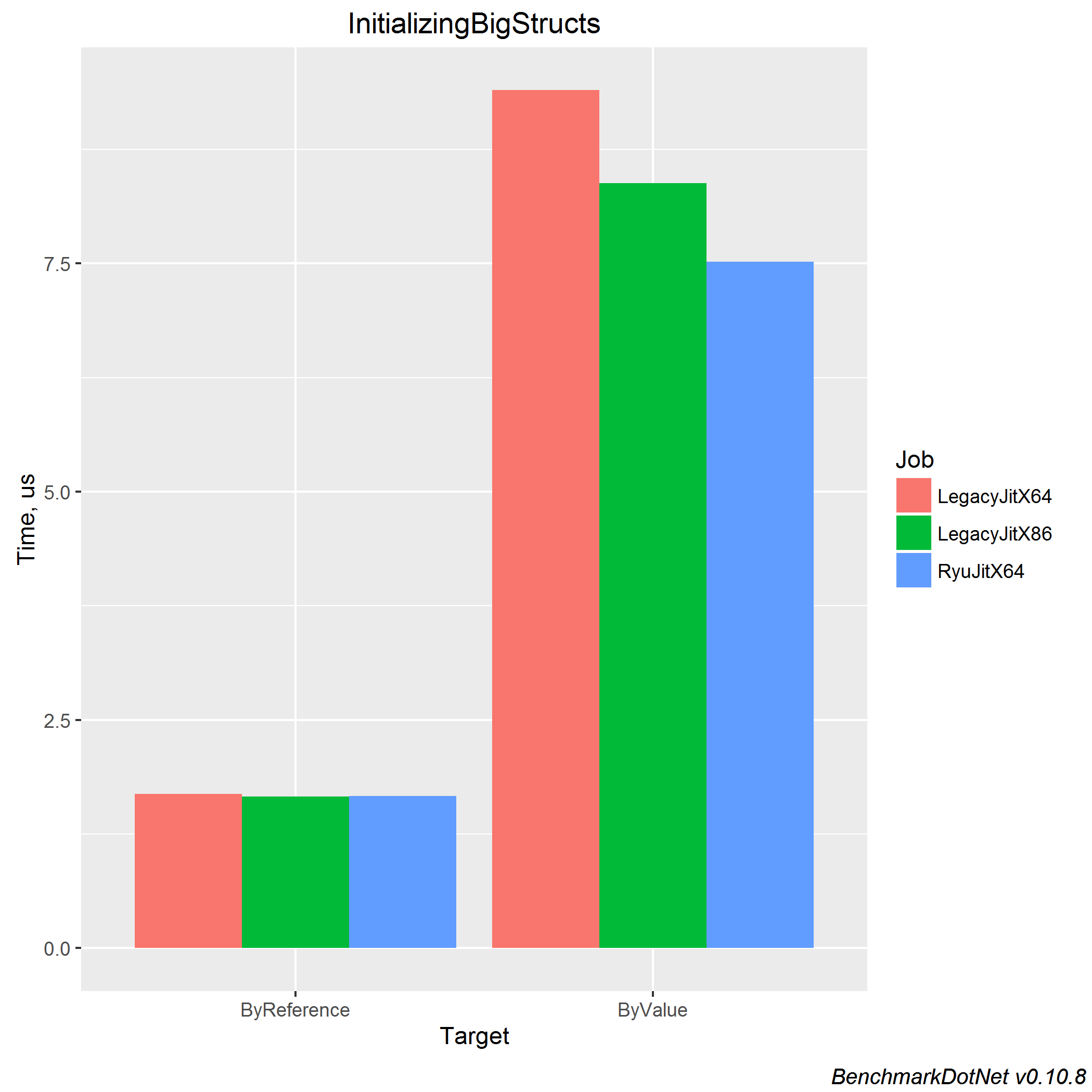 As you can see the difference is HUGE. In this simple scenario, we got x4.51 performance improvement for RyuJit! 5.58 for LegacyJitX64 and 5.05 for LegacyJitX86. It’s clear that this feature can be very useful in similar scenarios.

But how is it possible that the new ref locals feature works with the legacy Jits? Have Microsoft released a Windows patch with .NET framework improvements? No! C# features like ref parameters, locals and returns are just using the existing feature of CLR called managed pointers. So to use it you just need IDE with Roslyn 2.0 version (Visual Studio 2017 or Rider) and you can deploy the code to your client’s old virtual machine which might be running with some very old .NET framework ;)

Returning results by reference can bring us performance gains similar to passing arguments by reference. This is why I am not going to run any benchmarks here. The very important thing is that they can help us to make things like Span<T> come true. I’ll describe Span<T> in my next blog post. Stay tuned!

As you most probably know C# allows us to use unsafe C++-like pointers. Unsafe code can not pass the IL verification, which is one of the CLR mechanisms that ensure type and memory safety (PEVerify). This is why the code that is using unsafe requires FullTrust to be executed. It might be not an option in some environments. I remember that long time ago the default settings in Azure were not allowing unsafe code to run. This is why a lot of common high-performance .NET libraries are not using unsafe. mscorlib.dll is using unsafe, but it is exceptionally not verified during runtime ;)

Let’s compare the performance of safe vs unsafe in the scenario described previously.

To our surprise, the safe way is faster than unsafe! Why is that?

When we are using safe references, we don’t need to pin objects in memory. GC understand managed pointers and knows how to update them when it’s compacting the memory. With unsafe this is not true, the managed memory needs to be pinned before it can be used. As mentioned by Victor Baybekov on Twitter, using fixed keyword prevent from inlining.

Note: This micro-benchmark is not including the side effects of pinning memory. If you pin many managed arrays in memory, then the GC has a lot of extra work to do when it’s compacting the memory. Once again I will redirect you to Pro .NET Performance book by Sasha Goldshtein, Dima Zurbalev, Ido Flatow which has a whole chapter dedicated to Garbage Collection in .NET.

C# 7.0 is not exposing managed pointers arithmetic, which is a part of the IL language. But the System.Runtime.CompilerServices.Unsafe class does. You can use it whenever you want to compare the references, move them by given offset etc.

You can find it the System.Runtime.CompilerServices.Unsafe NuGet package. It targets .NET Standard 1.0 so you can use it in both .NET 4.5+ and .NET Core 1.0 apps. Not to speak about other frameworks that implement the standard. The api is following:

Note: it’s not full api. Some methods were removed for brevity. You can find the single .il file that contains the implementation in the corefx repo

Hopefully all these limitations are going to be addressed by C# 7.2. You can follow the issues today on GitHub:

Don’t forget to support the new C# 7.2 features! Thumbs up!